The Waters Turbine
Optimizing energy extraction from a moving fluid

The goal of a wind or water ﻿turbine﻿
Convert the force﻿ of a fluid passing through a given area into electrical or mechanical force.
Force increases by the cube ﻿with velocity

Current designs maximize aerodynamic efficiency like an aircraft. This results in long thin wings that comprise less than 5% of the total disk area in the region of maximum torque (the tip). Much of the air passes through unaffected or in a region that contributes low torque (the root). Only the tip of the blade maximizes leverage. A typical Horizontal axis (HAWT) and Vertical (VAWT) is shown below. A VAWT) has to fight upwind on one side as it rotates, usually resulting in less efficiency.

3.       Accelerate all flow prior to extraction of energy.

4.       Place all of the blade area at both the maximum point of leverage and the highest flow velocity.

There are two choices for accelerating flow. Divert around an object or constrict through. Diverting flow to the outside provides more leverage for a given size object. Generally, large costs more than small. Complex costs more than simple. Here is a basic design that meets the criteria. 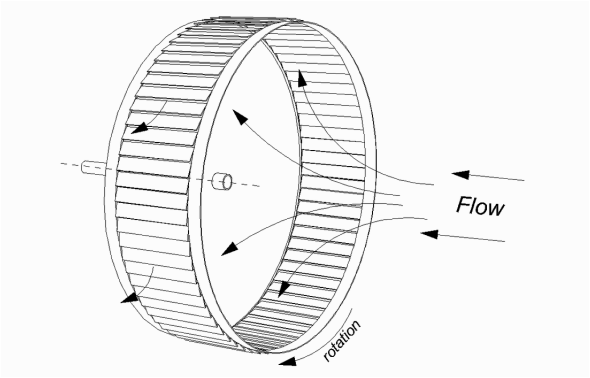 In the above illustration, all of the flow has to go around the back plate,  accelerating in the process. A band of blades is mounted around the perimeter at both the maximum point of leverage and maximum flow velocity. As a result, all of the fluid is utilized and accelerated to maximum velocity prior to use. 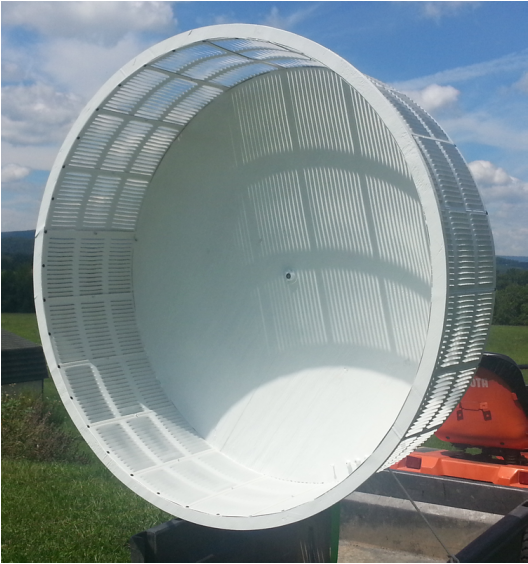 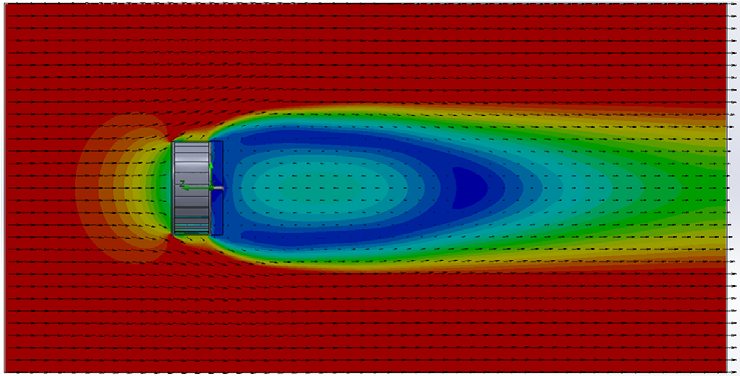 Third party and direct comparison test
There have been three separate third party tests, including computer flow analysis. My own direct comparative tests against a conventional high performance wind turbine in a broad range of conditions confirm theory. We ran direct comparisons in real world conditions for days because 3rd party results seemed too high. One result was well over 30 times. An aerodynamicist study over several months of tests found a maximum of 122 times more efficient at 14 mph.

The conventional design was a molded precision product with an accurate airfoil. Mine was far from optimized, using no airfoils in order to build at low cost. Comparing my 4' design against a stock 5' three blade, under the same load, the conventional product starts at over 7 mph and produces very little torque or rpm at that speed. My turbine, under the same load starts at under 1 mph. If the square force relationship is used that is 49 times more force required to turn the conventional design. If the cube rule is used the difference is 343 times. Then there is a size difference. The actual formula is more complex and varies with wind speed but the results are interesting. Startup velocity is just one factor but this shows that a much broader wind velocity range can be utilized.

Another interesting data point, under extreme shaft load, the conventional turbine would not turn, even at 28 mph. My design in the same conditions self starts at 11 mph.

Test equipiment involved a prony brake, rpm meter and wind meter. Accuracy of both wind and rpm meters was within 5%. Prony brake measurements were comparative and direct, utilizing the same shaft, load and conditions for both designs.